Poeth's current management team, bringing together Marc Peerlings, Loe Verheijen, Paul Roefs, and Hans Peeters, has taken over 100% of the shares of Poeth B.V., established in Tegelen. On 24 December 2018, the members officially signed the takeover and afterwards made the decision public.

Owners of the company

Management is taking over the company from the current owner, who had been a long-distance owner of the shares since 1999. ‘Poeth's strength lies in the fact that our development and production activities are based in-house. This guarantees our flexibility and means we can respond effectively to customer demands. The management team had put a lot of thought into the takeover, and all of its members are proud that they now own the business,’ says Marc Peerlings, General Manager of Poeth.

On the right track

Although the team was already in charge of Poeth's operational management, they are now in an even better position to ensure the company stays on the right track. Established in 1921, Poeth has grown over the years to become a successful, stable company that possesses a wealth of knowledge about machines, systems, and processes. ‘The management team wants to build on Poeth's success. We will pursue our current activities and continue to deliver the same level of service to our customers that they have come to expect from us. As a management team, we will now focus more on ensuring continuity and innovation. Technological innovation is one of the most important cornerstones of our company,’ says Marc Peerlings. At the end of 2018, Poeth received a permit to build a new production facility at its current location. We expect to be able to start building this 2,700-m2 facility in the second quarter of 2019

Operating both in the Netherlands and internationally, Poeth specializes in developing and constructing machines and systems for powder and bulk-processing industries. The company has 65 employees and is active in various segments, including food, feed, bulk & solids, brewing, and the chemical industry. They develop, produce, and install all their machines and carry out all their projects independently. Poeth offers a huge range of services, ranging from consultancy to turnkey projects and everything in-between. 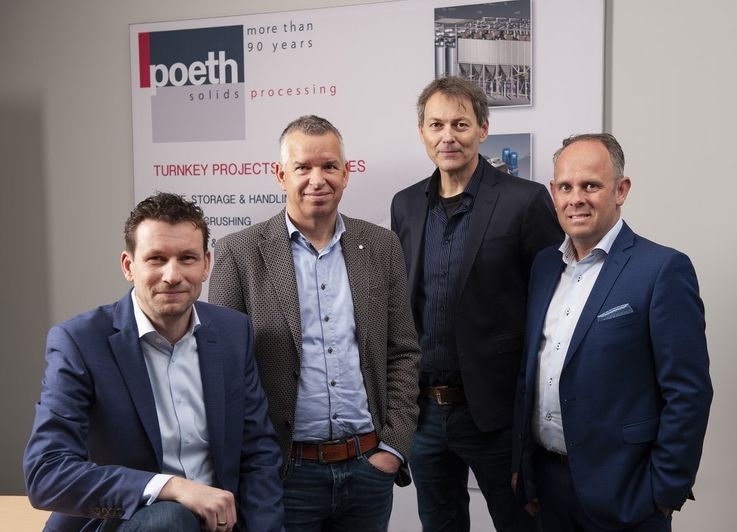